THE PHILOSOPHY OF COLOR IN ARAB MANUSCRIPTS

ABU DHABI, May 31, 2021 – The Khawla Art and Cultural Foundation, founded in Abu Dhabi by Her Highness Khawla bint Ahmed Khalifa Al Suwaidi, with the aim of promoting Arab arts and culture, with the art of beautiful writing in mind , organized an international conference (online), on the theme « THE PHILOSOPHY OF COLOR IN ARAB MANUSCRIPTS ».

The seminar, attended by calligraphers, academics and specialists in Islamic art and Arabic calligraphy, was moderated by Dr. Karim IFRAK, Islamologist, codicologist and book historian. He spoke of aesthetics and color treatment in the illustration of manuscripts, as well as the important place it occupies in the art of the Arabic book. He thus underlined that the use of color, especially in chrisography, does not only have an aesthetic role, but also helps to nourish the philosophical dimension of the handwritten work. He thus reviewed the artistic aspects of color, including illumination, in the various pictorial schools, as well as their expressive, symbolic and philosophical connotations invested in Arabic manuscripts.

Her Highness Khawla bint Ahmed Khalifa Al Suwaidi recalled that the organization of this conference is part of the Foundation’s desire to promote the art of Arabic calligraphy, to highlight its beauty and its specificity, and to contribute to perpetuate this traditional art considered as one of the most important components of Arab and Islamic heritage and identity.

She also stressed that highlighting Arabic calligraphy was an integral part of the general desire of the UAE’s leadership to promote Arab art, literature and science, as well as Arab cultural heritage in general. By organizing high-level cultural conferences and workshops, the Foundation contributes to providing young people with valuable knowledge about classical and modern Arab art. Crucial initiatives that aim to make the United Arab Emirates a center of culture and an incubator of creativity.

For his part, Islamologist and codicologist Karim IFRAK congratulated the foundation for its sustained efforts to keep alive Arab art, literature and culture, especially the art of beautiful writing: calligraphy. 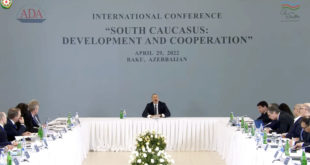