Kazakhstan, a former Soviet republic, is a country in the north of Central Asia at the junction of Europe and Asia. As big as 5 times France, it shares its borders with Russia in the north, China in the east, Uzbekistan, Kyrgyzstan and Turkmenistan in the south. Bordered by the Caspian Sea to the west (1,894 km of coast) and the Aral Sea to the south-west (1,070 km of coast), this immense territory of 2,724,902 km2, long crossed by nomadic populations, Huns and Mongols of Gengis Khan, has a very varied relief between steppes, valleys and mountains.

As the 9th largest country in the world, Kazakhstan has more than 19 million inhabitants (2020), coming from 130 ethnic groups : Kazakhs (63%) Russians (25%), Uzbeks 3%, Ukrainians 2%, Uyghurs 1.4%, Tatars 1.7%, Germans 1.4%, but also Kyrgyz, Tajiks, Mordves, Avars, Gagauz, etc. This eclectic set represents 45 confessions including Islam, Christianity, Judaism, Buddhism, Zoroastrianism, in addition to a number declared without religion. Its constitution, adopted in 1993, designating this country as a secular republic, means that it has never experienced any religious disturbance or fundamentalist thrust.

Kazakhstan has been open to the world since its independence in December 1991 and is now a member of major international bodies such as the United Nations and the WTO, as well as several regional organizations. These include the Collective Security Treaty Organization (1992), the Shanghai Cooperation Organization (2001) and the Eurasian Economic Union (2010). In the same year (2010), Kazakhstan assumed the chairmanship of the Organization for Security and Cooperation in Europe (OSCE); the largest regional security organization, comprising 56 countries in Europe, North America and Asia.

AN ELDORADO HALFWAY BETWEEN EUROPE AND ASIA

Following its independence in December 1991, Kazakhstan had undergone a major social transformation supported by a strong economic policy. In this respect, its growth performance between 2000 and 2014 was impressive, reaching almost 8% per year in real terms, i.e. well above the 4.15% needed to catch up to OECD income levels by 2050. These major achievements, which have helped create 2.5 million jobs, have led to a dramatic fall in poverty and a significant improvement in the living standards of Kazakhs. This was a major development in infrastructure, education and culture, enabling this young, newly independent country to win the title of the first ex-Soviet republic to repay all its external debt, well ahead of the deadline imposed by the IMF. Galvanized by this impressive achievement, Kazakhstan naturally embarked on an ambitious reform agenda, aiming to become one of the world’s top 30 economies by 2050.

Kazakhstan possesses significant natural resources and houses almost the entire Mendeleev painting in its basement. This is an exceptional situation that allows it to export iron, chromium, copper, aluminum, zinc, lead, manganese, chromium, nickel, cobalt, bauxite, potassium and many other riches. Its aluminum and phosphate production is world class and its coal is sold to Russia, Ukraine, China, Belarus, Poland and many others. With almost 17% of the world’s reserves and 14,000 tons/year, Kazakhstan, which supplies 20% of France’s nuclear power plants, is undoubtedly the world’s largest uranium producer (33%). In terms of energy, Canada ranks 12th in the world in terms of oil reserves and 22nd in terms of gas reserves. Important energy resources that supply many countries, starting with its neighbors Uzbekistan and China, but also Germany (12%), Spain (6%) and Italy (4%). Since 2017, the largest importers (by volume) of Kazakh oil are now European, with France leading the way with no less than 13%.

Aiming to enhance its economic potential and geographical position, by asserting itself, inter alia, as an emerging Eurasian power, Kazakhstan has managed to turn its three decades of independence into a period of economic progress and sustainable development. A constant effort that has brought results, since it has allowed it to become the largest economy in Central Asia. Thus, in addition to the enormous potential of the energy sector, the country is also the financial center of the region, unsurprisingly home to the largest bank in Central Asia and major players in the financial sector.

Another significant performance is that, over the past 30 years, Kazakhstan has been able to attract foreign investment of USD 370 billion. This amount allows Kazakhstan’s economy to remain one of the most dynamic in Central Asia and the post-Soviet space. With a GDP exceeding USD 170 billion in 2020, Kazakhstan alone accounts for nearly 50% of the region’s GDP. A financial health that continues to attract many major international groups. Major groups, notably French, include: Bouygues, Total, Cogema, L’Oréal, Moulinex, Thomson, Lactalis, Alstom, ADP and Société Générale. A French presence that remains very modest compared to the larger investments of the USA, Germany, Italy or Holland.

Better yet, in just a few years, Kazakhstan has become one of the world’s largest producers of virtual currency. According to a Cambridge University indicator, this young country provides up to 18% of the global computing power used to mine bitcoins, placing it second among the largest producers of this coveted currency in the world, after the United States. This performance is achieved thanks to the overabundance of electricity, essential to power supercomputers known as energy-intensive.

A COUNTRY OPEN TO DIALOG AND THE WORLD

As an ethnic and religious mosaic, Kazakhstan has naturally sought to make the country’s peaceful coexistence an asset for its domestic stability and an element of its international diplomacy. To this end, it immediately made use of this precious resource in order to make dialog one of the pillars of its international relations policy and its positioning on the world stage. In the light of this ambition, every three years, Nour-Sultan, the capital of Kazakhstan, is transformed into the world capital of intercultural and interreligious dialog. An international congress attended by senior representatives of Christianity, Islam, Judaism, Buddhism, Hinduism, but also Taoism, Shinto and Zoroastrianism provides an opportunity for key political figures and representatives of international NGOs to meet and talk. A contribution, fully assumed for almost twenty years now, which strives to develop harmony between peoples and societies. Thus, through these meetings based on the principles of freedom, inclusiveness and tolerance, Nour-Soultan has been pursuing, since 2003, a project that is exclusively humanist: make Kazakhstan a global laboratory for intercultural and interreligious dialog.

In a country at the junction of Europe and Asia, where more than 45 faiths live side by side, this approach is a very necessary response to the ideological shocks that certain expansionist extremist forces are trying to promote.

In a world constantly marked by wars and conflicts, any initiative in favor of dialog and consequently of peace is more than welcome. A context that is ultimately no stranger to the spirit of tolerance and coexistence that has alwys reigned in Kazakhstan, a crossroads of cultures and civilizations.

This is why, at a time when the world wants to turn away from the rest of the world, Kazakhstan is seeking to turn towards it. 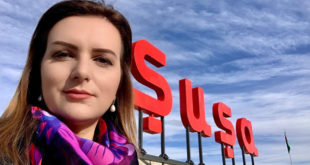 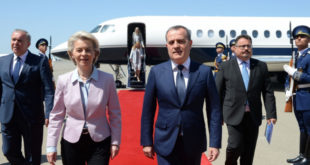 WAR IN UKRAINE AND ENERGY CRISIS: AZERBAIJAN TO THE RESCUE OF EUROPE

The President of the European Commission, Ursula von der Leyen, announced on Monday an agreement …